Teach me to Photograph

I am often asked to teach others to do photography, but it is like asking an artist to teach you to paint… I can teach anyone the technicalities of a camera, but a camera does not make the images, the intuition, emotion, creativity and style of the photographer brings the image together.  Teaching someone to set up a pose such as this and then capture it simply is not something you can easily do.  Learning to set up scenes that look natural and as if you just happened to be at the right place at the right time is what makes wedding photos amazing. 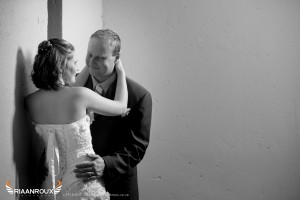 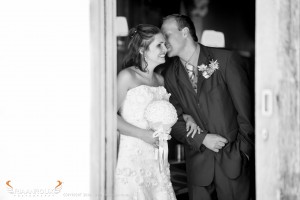 Backdrops are expensive.  Most amateur and startup photographers opt for the old boring white backdrop because it is the cheapest.  White is not only hard to work with, but it is boring and tends to wash light back into the model and limits lighting options (if you want the white backdrop to look white).  If you light a white backdrop wrong it shows folds and wrinkles and tends to get a muddy look to it.

How do the professionals do it?

Professional photographers, when forced to use a studio, use paper backdrops.  Paper gives the best look without washing back too much light and it gets a nice smooth matte look.  If you browse through most of the top fashion magazines you will also notice that the backdrop is often not white.  The most popular backdrop colour is grey and often a darker grey as it shows clear intent of colour rather than a faded white which appears muddy light grey.  Grey is very versatile as it does not wash light back like white does and does not need to be carefully lit like white or even black.  Grey gives the photographer the option to focus all lighting on the model rather than try to balance background with the model.

But Paper is Expensive!

Yes, paper is expensive and can tear easily, especially when doing full length shots.  This is why I use roof paint!  Quality roof paint is not very expensive and even a 20 liter drum of dark grey (as I prefer) costs less than half of a paper backdrop.  Roof paint also has a texture very much like paper and it is tough.  When high heels and other wear and tear starts showing you shake up your paint drum and paint over scuffs and marks.  Quality roof paint blends perfectly with previously painted surfaces and does not show patch marks.  Roof paint is like a repairable paper backdrop!

How did I get the infinity curve?  After a few experiments building infinity curves I eventually abandoned infinity curves as they can easily get damaged and limits background usage in my limited space to that area where the infinity curve ends, so no leaning on walls (which give nice looking shots!).  I have a normal wall and I spend less than 1 minute in Photoshop linking the floor and wall into an infinity curve using the patch tool.  This is a very basic Photoshop function…seach Using The Patch Tool on YouTube. 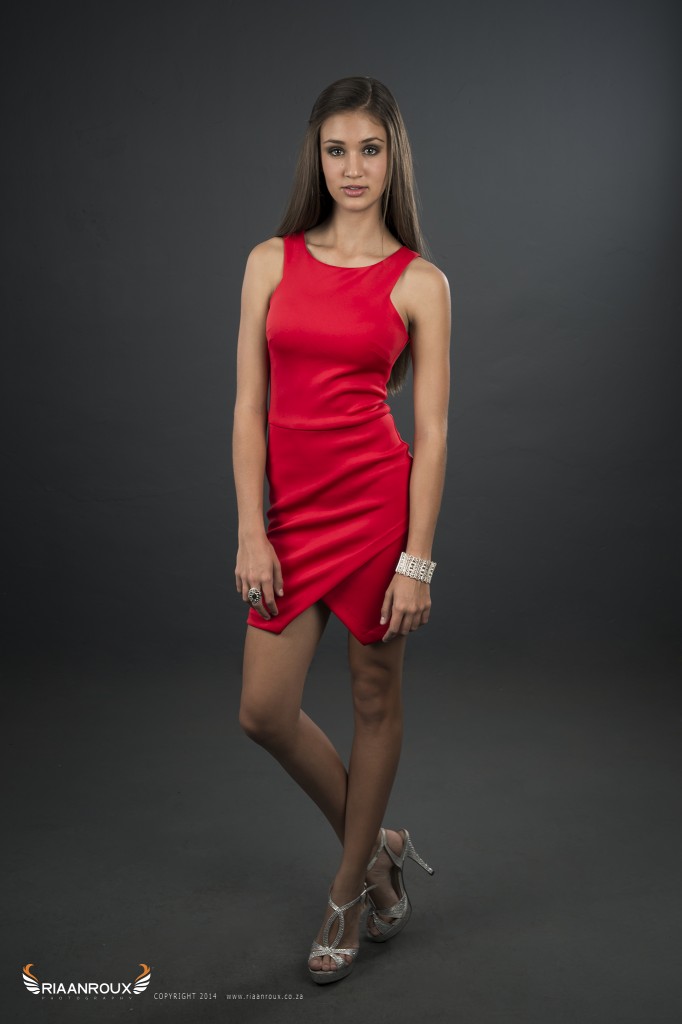 Photography & Video Underground in a Gold Mine

One of the things I enjoy the most is doing underground photography. Ever since I got my first assignment from a Gold Mine in South Africa asking whether I would be willing to travel deep underground and photograph a group of visitors who would be visiting their mine I was hooked. I was warned that the environment would be unlike anything I have experienced and I have to state to anyone who wants to do this, or ever is offered such a job, it is not like any photography job you will ever so.

Under ground the environment changes as it is artificially stimulated to sustain human life. The stope, that space at a rock face where ore is extracted, is hot, humid and dusty. It is an unfriendly and wild environment where the air is breathable, but not anywhere near comfortable. Mining is not for soft people…it requires a person dedicated, hardened and willing to work in an environment you will not experience above ground. There are men and women down there who collect many tons of ore to make just one golden trinket.

The first time I went underground I used my Sony A77 which is a crop sensor camera, but in the cramped spaces I soon discovered that the Sony SAL2875 SAM lens was just not wide enough. At the time I owned the Sony A900 as my only full-frame camera and I was very scared to take it down as it cost me so much money, but on a third trip down and noting that the A77 suffered no ill effects I took the A900 down and it was amazing! Full frame and a wide angle non-distorting lens is great! Yes, I could use wider angle lenses, but I did not want the distortion which comes with these lenses (I did try a 19mm lens and it was horrible underground).

The Sony A99 change me as a photographer…it fealt as if I had re-entered the days of film, but with some super-juice! The Sony A99 is just a different piece of equipment designed around the photographer to make life simpler in even the harshest of environments. After spending so much money on my A99 you would think I would wait a while before I took it underground into the wild depths, but I had it less than a month and it accompanied me on my next available mine excursion. Why? Because the A77 and A900 had already proven to me that this class of camera is really weather sealed and more than capable of handling these extremes (and I did a wedding that next weekend with my A99!).

Now…a long time after taking the A99 underground it is still my favorite underground photography and even videography piece of equipment. There is not always a lot of light and I make do with what is down there as flash often destroys the mood. Even when shoot at ISO6400 I find the photos perfect for use in posters, booklet and even banners.

Here is a video snippet I shot yesterday on the Sony A99 while in one of the harshest environments in the world. 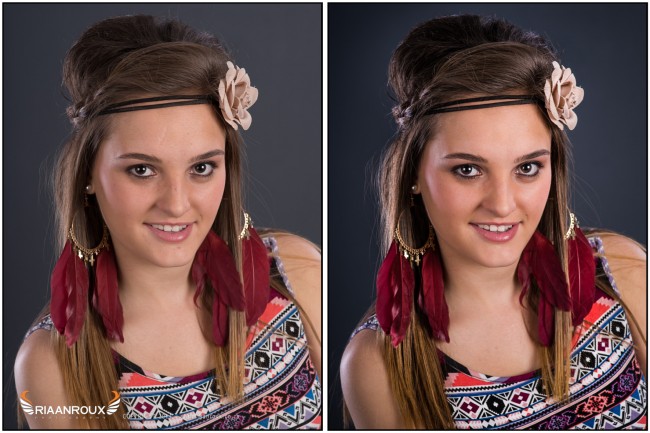 The heading should actually read To Edit or Not to Edit, but the word Photoshop has become more a term synonymous with the editing procedure rather than the product by Adobe. As a photographer each of us are faced with editing decisions every day and each of us has developed a taste and style of editing. Here I am going to generalize a little for the purpose of simplicity and include all types of retouching done to original photos. Recently a number of articles have appeared which lambaste retouchers, photographers and magazines who edit photos to such an extreme that you would not recognize that person if you walked past them in the street.

What is my opinion on editing photos?

In my opinion editing is something which should be done subtly so that the end result still looks realistic and believable. When someone looks at one of my images I do not want them to immediately think…WOW, great Photoshop work, I want them to see the image and afterwards wonder if any editing had been done. Too many photographers, especially new photographers tend to overdo their work so that the first thing one sees is the editing and afterwards you notice the subject. I see so many people who smooth peoples faces to such an extent that they look like wax dolls, but this is unreal as no-one will ever look that way. Skin has a natural texture and it cannot be completely smooth. Below is a recently edited image (right) next to the unedited version straight from the camera (left). This shows the level of editing I like to use. The final image even still has some skin imperfections, but this is purposefully left as I believe in a concept I term “Perfect Imperfection” which is that little bit of reality I leave in a image to make it real.

Does this make editing wrong?

No, editing is a fact of photography. Though some purists may argue that one should not edit photos at all, I feel it is a personal part of each photographer. Each one needs to decide how much they want to edit to suite their style. The editing method is personal and part of the artistic impression each photographer leaves on their work. Similarly I feel it is unfair to ask a photographer for unedited photos as they will always feel that the work was never completed. It is like walking into a restaurant and asking for uncooked food as you will just cook it at home…what is the point?

I recently posted a new Facebook Profile Photo and got quite a bit of response via email and Facebook inbox messages asking what the settings were and what the light setup was.

I call the light setup Triangle Lighting and I originally saw the famous headshot photographer, Peter Hurley, use something similar with continuous lighting. I thought that the light setup should theoretically work with strobes turned down fairly low.

I used two 90cm X 90cm softboxes turned about 30 degrees inward and placed right next to each other with a 140cm X 30cm stripbox (with grid) to close the lower half. Refer to the image (click on image to open in new window for slightly higher res image).

I set the strobes fairly low and measure with the two large softboxes to get an f/8.0 (on ISO100, 1/200 shutter) on my light meter. I measure with both strobes switched on as they are coming from the same angle and are additive to one another. I then measured the strip box alone at f/5.6 as it will be a fill only. I then measured everything together to confirm total additive light is not exceeding my aim of f/8.0

This lighting setup creates a large soft light area directly from the front result in a very flat lit image, but which is appealing for headshots where you need that well lit look. I set my 90X90 softboxes with a little more light than the stipbox so I do not complely eliminat shadow, but rather create just enough shadow to give the image definition. This is not 3 point lighting and I would say rather qualifies as single point lighting as all the light is coming from one angle.

The advantage of this lighting technique is that it simulates a very large light source and thus also softens the light. The only other time I have seen this same look is from a very large parabolic umbrella (1.8m or larger) behind the photographer. A big advantage of this kind of light is that it fills in even small shadow areas so skin appears very smooth, but then again, everything else tends to smooth out too so textures may become lost.

It is what it is and should be used where you need this look.